The school receives a number of different queries relating to the complicated topic of Assessment here at Calderstones. So we have attempted to collate some of these questions into an FAQ below.  Just tap or click on a question to find out more:

How does the Calderstones grading structure relate to old GCSE grades and old national curriculum levels?

This image below will help you understand the new level system versus the old grading system: 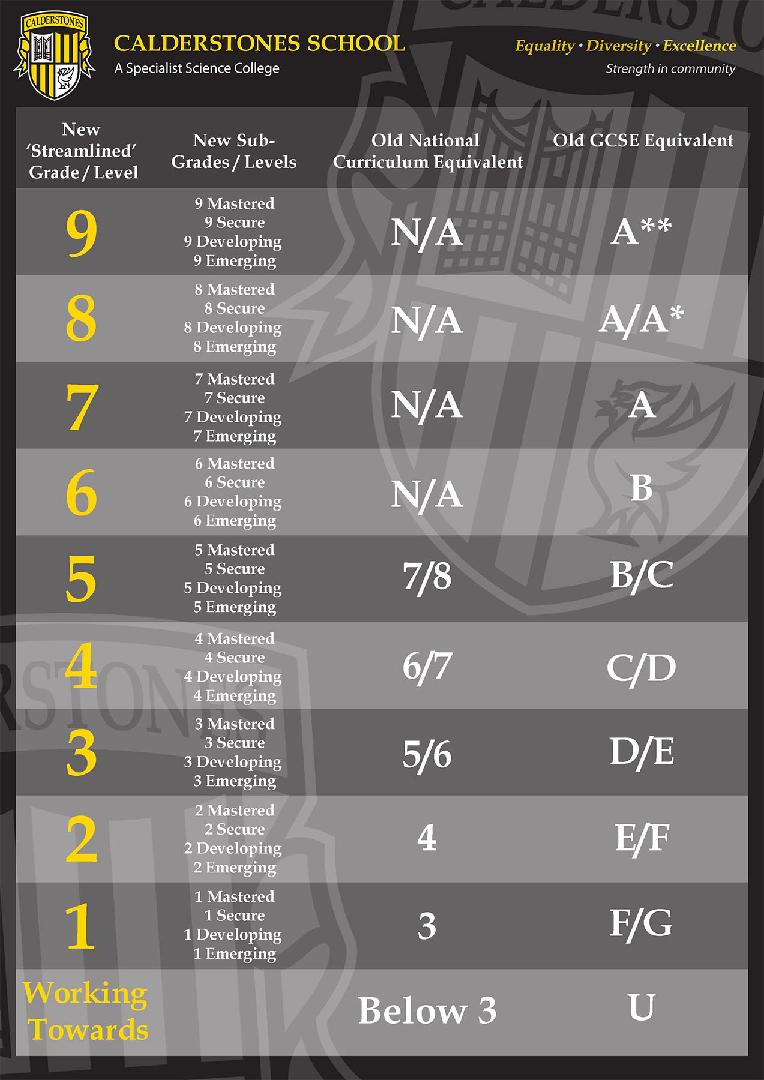 Why does my child not appear to have made any progress?

Some parents have contacted us with concerns that their child doesn’t appear to be making any progress. In a sense, the answer to the question above covers this: that over time, we would expect to see progress but that between assessment points, this might be less clear in the short term.

Our curriculum is the progression model so we would expect to see students know more and remember more over time. All our assessments are cumulative, which means that students will be assessed not only on what they are studying now but also, on what they have studied previously. Furthermore, students are assessed on their component knowledge (specifically what they know) and their composite knowledge (how they are able to apply this knowledge) so that we can best identify any gaps in understanding to maximise future progress. Consequently, there may not be a significant difference to the percentage (%) attainment in and across subjects over time.

Why is my child being assessed as performing so differently in different subjects?

This comes up a lot. It’s always been a question that parents have asked, particularly in Year 7. With some children, this will naturally happen just because of their relative strengths and weaknesses in some subjects. Some children are just better at Maths than English. In these cases, this probably won’t be too much of a surprise to most parents.

However, there can be significant differences between levels of attainment across some subjects. Often, this is because of a student’s exposure to that subject at primary school. Most students have been absorbed in English and Maths for much of Year 6 but may not have studied any French or Spanish at primary school at all. As such, they’ll clearly be behind in terms of assessment in those subjects.

The same is often the case for subjects such as Design Technology and Music for example. Even in subjects such as Geography, History and Science, students can find themselves being assessed at very different levels of attainment early on in their time at the school, often because of their varying experiences of these subjects at primary school. This settles over time. In fact, in many of these subjects what is usually noticeable is that the students’ rates of progress is quite rapid – many of them often catch up with their attainment in other subjects quite quickly.

Why has my child’s level of attainment gone down since the last reporting point?

This is not an uncommon issue, regardless of the new assessment system that we’re introducing. Quite often this depends on the structure of a course of study. Over time, you would expect to see your child improve on their assessment grades as they develop skills knowledge and understanding. However, between assessment points (from one half term to the next term for example), this may not be entirely clear and in some cases it may look as though your child has gone backwards.

This is easiest to explain in a subject such as PE for instance. If a student has studied football and basketball in the first term and they’re highly accomplished at these sports then their level of attainment will be relatively high. If they then study cricket and swimming in term two and they struggle with these units, then their level of attainment will be much lower. This will be the case whether the grade reported is just reporting on cricket and swimming or whether it’s taking the average of all four sports into account. It will appear that your child has gone backwards. Over time, you would expect this to flatten itself out; that in total, your child’s overall ability in PE is being reported on once the staff have gauged their competence across a range of units.

The same is the case for a number of other subjects. DT, Art and Music are similar, albeit not quite as extreme as PE, examples.

Even in subjects such as Maths, English and Science, progress isn’t always linear. Some students find some topics more difficult than others and some methods of assessment more challenging and this will show in their assessment grades. Over time though, we would anticipate that these ‘creases’ would even out and over the course of a student’s time at the school, you would see progress occurring.

How is my child’s target arrived at?

In short, each child’s target for each academic subject is based on their attainment scores from Key Stage 2 SATs. We take these scores and ‘project forward’. We basically look at what happens nationally for the vast majority of students who have historically achieved that same Key Stage 2 score, i.e. what GCSE grade would those students usually get in those subjects. We then base the target on this. In some cases, we add some aspiration to these targets.

Throughout their time in the school, a student’s target in any particular subject can be raised by a teacher if that teacher feels that the student is already meeting or exceeding the target or if they feel that the target is not challenging enough. For this reason, you may find that your child’s target increases during their time at the school. It should only ever increase; it should never be lowered.

How are these assessment scores and grades arrived at?

At Key Stage 3, students will receive a percentage (%) attainment per subject, as well as the average attainment across the whole year cohort per subject and the range of results across the whole year cohort per subject ,to help you to understand your child’s attainment. For example, Student A = 65% in English with an average cohort attainment of 62% and a range of 27% - 94%. You will also receive a progress statement, letting you know whether or not we feel that your child is making expected age related progress. This will be different for every child as it will be based on their Key Stage 2 scores, which the government use to monitor and calculate progress between Year 6 and Year 11.

At Key Stages 4 and 5, students will receive grades, which equate to GCSE/ A Level standards. They will have a target grade (what we believe they are capable of achieving at the end of the course), their assessment grade (what they have just achieved now, based on the work covered to date) and their predicted final grade (what we feel they will achieve based on their current attainment and professional judgement), which will indicate whether or not we feel that your child is making expected progress.

You keep referring to this ‘new assessment system’. What do you mean?

For children who are new to the school, this won’t be a new assessment system! But for those who have had children at Calderstones in the past, or who currently have children here and who have been assessed under the ‘old’ system, or who have some understanding of previous system, this will be entirely new. The new system is in response to the latest academic thinking, to ensure that we are research informed in our practice, to best meet the needs of our students.